Click or tap a question below. For additional help read the instructions.

How do I transfer my lists from the lite version to the full version?

Paperless Lite includes a button in the settings that will quickly and easily transfer all of your data to the full version. Simply tap the settings/gear icon on the main screen, then tap on “Transfer Lists To Paperless”.

You can change the order of the lists on the main screen, or the order of items within a list by doing the following: 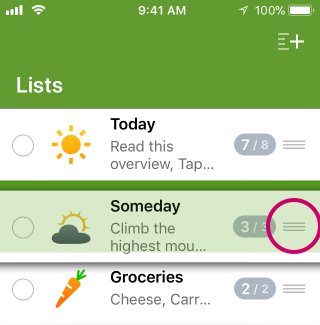 I accidentally deleted a list, is there any way for me to get it back?

If you previously enabled the “Automatic Backup And Syncing” feature, you may be able to recover a list that was accidentally deleted since Dropbox saves deleted files for 30 days.

Dropbox’s own instructions on recovering deleted files may be helpful as well.

All of my lists disappeared! What happened and how can I get them back?

Paperless uses Dropbox to sync lists. If you accidentally deleted the “Apps > Paperless” folder from your Dropbox account, then Paperless will think you deleted the lists on purpose and will remove them from the app.

However, you may still be able to recover the lists within 30 days of having deleted them.

Dropbox’s own instructions on recovering deleted files may be helpful as well.

One of my lists is grayed out with a spinning 'busy' circle next to it, and I can't tap to view it. How do I fix it?

It sounds like one (or more) of the lists failed to finish syncing for some reason and is now stuck.

If you have Paperless installed on a second device, the easiest way to clear that up would be to:

If you don’t have Paperless installed on another device (or doing the above just didn’t work), then try the following:

How do I get my lists from my old iPhone onto a new one?

There are a few different ways you can get your lists from an old iPhone onto a new one:

I accidentally deleted the app, how can I get my lists back?

If you were previously using the “Automatic Backup And Syncing” feature in Paperless, which stores a backup of your lists on a Dropbox account, you could get your lists back simply by reconnecting Paperless to that same Dropbox account. 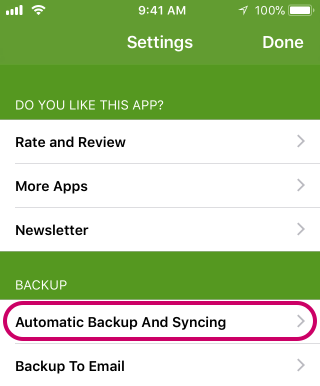 If you’re sure you previously had your lists backed up to Dropbox but that didn’t work, it’s possible that the lists are still stored in an old location on Dropbox and need to be moved:

Another possibility is if you recently made a backup using the “Backup To Email” feature… you could restore lists from that backup.

There may be one other possibility for recovering your lists:

If you happen to back up your iPhone via iCloud, you may be able to restore the device to a previous state – from before the time when the app was deleted.

However, it’s important to understand that doing so would also affect all of the other apps on the device. Make sure you have information from other apps backed up – including photos, videos, etc.

You can see if recovering from an iCloud backup is a possibility by checking the following:

There you will see a list of backups you have on iCloud. Look to see if there is a backup of your device, and see if the switch for “Paperless” is on, in the list of apps on that screen.

If you do see a backup listed there, you can attempt to recover your lists by doing the following:

Apple’s own instructions to “Restore from an iCloud backup” may be useful.

Paperless closes/crashes a moment after I open it, can you fix this?

Try restarting your device to see if that clears up the problem:

If that doesn’t fix it, you may have run into a rare issue where the link to Dropbox needs to be reset.

If it doesn’t crash, do the following to reset the link with Dropbox:

Now all of your lists should get backed up to Dropbox and sync with your device. (if anything happens to be missing, you can open the “Mail” app, and recover the list from that backup email you made earlier)

Is Paperless available on Android devices?

Unfortunately Paperless is not available on Android or other platforms.

Backup and syncing via Dropbox

How do I back up my lists?

Paperless includes an automatic backup feature that saves all of your lists to a free Dropbox account. This feature also allows you to sync your lists between devices. To turn on automatic backup and syncing, go to the Settings screen within the app and tap “Automatic Backup and Syncing”.

Also available from the Settings screen, is “Backup To Email”. Use this feature to send a backup of all of your data to yourself via email. To restore lists from the backup, simply open the email using the “Mail” app on your iPhone/iPad, then tap on the “Restore All Lists” link. (or you can restore individual lists from the backup as well).

Syncing lists between devices isn't working. What can I do?!

If you’re having trouble syncing lists between devices, the first thing to check is to make sure that the “Automatic Backup and Syncing” feature is still turned on. Do this on each device that you have Paperless installed on:

Beyond that, syncing issues are usually related to a poor wifi/cellular connection, or some other temporary issue with connecting to the Dropbox servers. If Paperless can’t connect to Dropbox, it won’t be able to tell if there is a new version of a list to sync over. Or, if a list can’t be uploaded to Dropbox, then it won’t be synced over to the other device.

There is a “Highlight Unsynced” feature which may help troubleshoot problems like that. With “Highlight Unsynced” turned on, lists that still need to be uploaded to Dropbox are shown in red text on the main screen (see the screen shot below). Once you’re somewhere with a good connection again and the list finally uploaded to Dropbox, the red text will change back to the normal color. 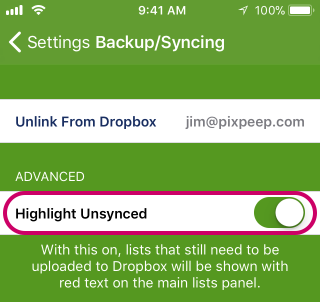 You can also look at your Dropbox event history to get a better idea of what’s going on.

For example, if you make a change to a list named “To Do” on one of the devices you should see an event similar to this listed there:
“In Paperless, you edited the file To Do.xml.” 14 secs ago

If you’re sure you have everything set up properly but one of your devices still isn’t getting the lists, try restarting that device:

When I modify a list, it gets synced back from Dropbox right away, what is going on?

Paperless relies on your iOS devices having the correct date/time set for proper syncing, and can sync more often than it should if the date/time is set incorrectly.

You can fix the problem by having your iOS device set its date/time automatically:

Importing a list (or full backup) from email isn't working!?

There are a few things that could cause importing a list from email to fail:

If none of that helped, try restarting your iPhone/iPad to see if that clears up the problem:

If you need further help or have a suggestion, contact me:
feedback@crushapps.com
(Unfortunately I can’t respond to every email.)

Crush Apps is an iOS software development company run by Jim Rhoades. I create outstanding applications that are fun and easy to use.

Read the blog to find out more about what I’m up to.

Sign up to receive news of upcoming releases and important announcements from Crush Apps.