Today Paperless will reach $100,000 in revenue (since March 2010), with over 60,000 sales and over 146,000 downloads of the free version. It’s nowhere near as much as the huge runaway success stories in the app store – but it has been enough to keep me in business doing what I love.

It feels great to have created something that many people use every day – and to have generated that income completely on my own.

It’s not enough to sustain this business for the long term though. That $100,000 is before taxes are taken out, and I have a family to help take care of… so, for the past 8 months I’ve been working on another app that ties into my love of photography. I hope to release that within the next month or two.

To anyone who has purchased Paperless and helped support what I’m doing: THANK YOU!

After figuring out how to use Siri dictation to quickly add items to a list in Paperless, I discovered some other commands it recognizes – based on this article about Dragon Dictation (a third party app for dictating text).

Here are the dictation commands that have worked for me with Siri.

For Paperless users: If you’d like your very own “pocket guide to Siri dictation commands”, open this web page on your iOS device, then tap this link to import a list titled “Siri Dictation Commands” into Paperless.

There has been a lot of talk about Siri, the “personal assistant” feature included with Apple’s new iPhone 4S. While much of that discussion has centered around seeing what responses you can get from Siri by asking it things like “What is the meaning of life?” or “Where is the best Thai restaurant?” – it also offers a very useful dictation feature, which works with any app that uses the standard iOS keyboard.

I wanted to see how Siri’s dictation feature could be used with Paperless, and it turns out that it can be used to quickly add items to a list. Here’s how:

First, open the list you want to add items to (a grocery list in this example), and tap the “+” button: 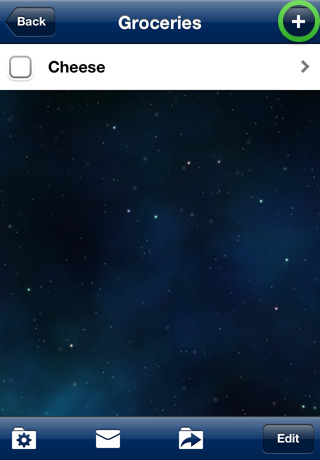 That will bring up the Add Item screen. Next, tap on the arrow… 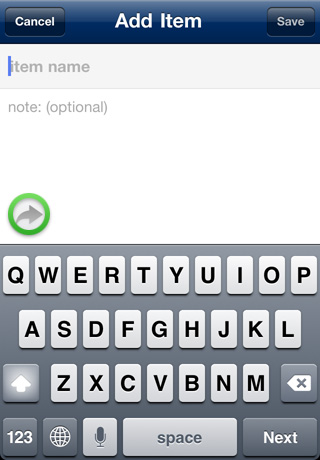 … which will switch to the Import Items screen. 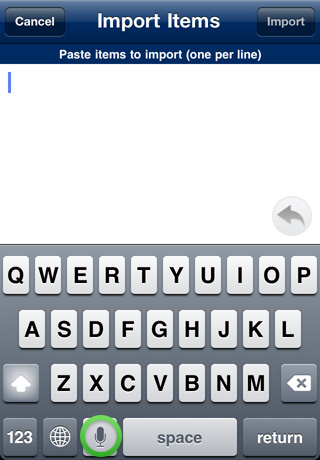 Now press the microphone button to start dictating, and say each item’s name along with the words “new line” in-between each one. For example, you might say:

(Saying “new line” to make a carriage return took me a few minutes to figure out, as I haven’t seen in mentioned elsewhere… not even in Apple’s iPhone User Guide.) After you’re finished saying the items, press the Done button – and if all goes well you’ll end up with the text of each item on a separate line (as shown in the screenshot below). 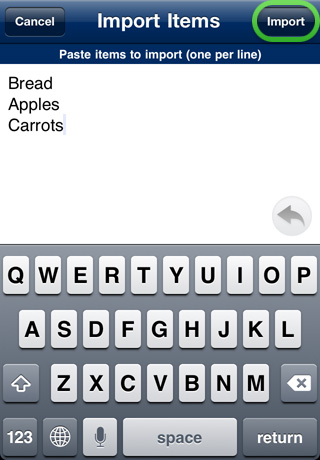 … and the items you dictated will be added to the list. Easy! 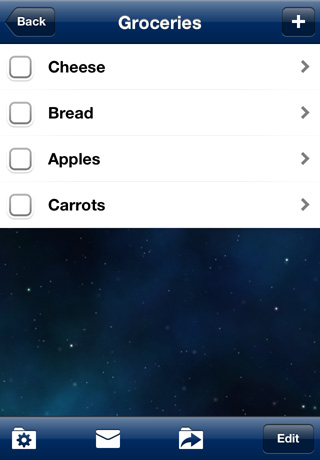 I think this feature will be very useful to a lot of people. Apple was very smart in adding Siri dictation to the standard iOS keyboard.

UPDATE: Paperless 2 has been released, and is now available from the app store!

After 6 months of research and development, the biggest and best update to Paperless is finished. I’m very excited about the upcoming release, and think users will really appreciate the new features. I am submitting the update to the app store today – so, assuming it passes Apple’s approval process – it should be available in a week or two.

Here are the new features in Paperless 2.0:

Paperless 2 is a “universal” app, which means that it will have a proper full screen interface when run on an iPad. In fact, I think Paperless is an even better app on the iPad than it is on the iPhone/iPod Touch. This is partly due to the larger screen and keyboard, but is also thanks to Matt Gemmell’s brilliant MGSplitViewController, which enabled me to give the iPad interface some nice features:

While I could have chosen to make a separate iPad app, and perhaps make more money from existing users, it just didn’t seem like the right thing to do. I personally don’t like having to buy an app twice (one version for each device), and it’s easier for me to work on Paperless as one app rather than have two separate versions to maintain. Perhaps I’m naive, but my hope is that having one “universal” app will be seen as a selling feature to new users, and be worth more than any income I might have made by charging for two separate versions.

Automatic Backup And Syncing Between Devices

Paperless 2 includes syncing via a free Dropbox account. If you have more than one iOS device, this feature will allow you to sync your lists between them. Since syncing was designed to happen automatically, you can just turn the feature on and forget about it. There is no sync button to press or any thought process involved in getting lists from one device to the other… it just works.

Even if you only have one iOS device, I still highly recommend using this feature as it automatically backs up your data. So, if your iPhone gets broken/lost/stolen/accidentally dropped in the toilet, you’ll be able to get your lists back.

Additionally, the Dropbox website allows you to “undelete” files, or even revert to a previous version of a file – which may come in handy if you accidentally delete a list from your device or need to get an earlier version of a list back.

For those of you who are curious about how the magic happens:

Syncing works by saving your lists as XML files in a “Paperless” folder on your Dropbox account. Each time you make a change to a list, its associated XML file on Dropbox is rewritten. If you switch to using a different device, it sees that there is a newer version of the XML file and downloads it to the device. Then it reads the XML file and updates your list to the newest version. It all happens very quickly and seamlessly.

Paperless checks to see if there are newer versions of lists when:

I should also mention that I chose XML over plain text files due to needing to store information like the date items were completed, the icon associated with each list, etc. While some computer savvy users will find it easy enough to update their lists by editing the XML files on a desktop computer, that isn’t something I’m touting as a feature since there are a few issues like needing to write the “&” symbol as “&amp;” in XML.

A little eye candy never hurts, and Paperless 2 has plenty of it. I’ve added 7 new themes in a variety of styles, and I think they look great (click to see a larger version):

I’d also like to take a moment to express my extreme gratitude to anybody who has purchased Paperless or told their family and friends about it, to those of you who have left a nice rating and review in the app store, and to those who have provided useful feedback. Without your support, I wouldn’t be able to do this, so I really appreciate it. I hope you enjoy using the new version of Paperless as much as I’ve loved making it.

Earlier this year Apple released the source code to MacPaint – the revolutionary graphics program that originally came with the first Macintosh computers in 1984.

My parents had purchased one of the original 512k Macs then, so I was lucky enough to get to play around with it. When I heard that the source code to MacPaint had been released, I decided to dig up some of the old things I had created with it.

Reproduced from line art of a space shuttle in an ad I found at the back of a magazine:

Just a scene with a car I drew for fun. In retrospect, that airplane is flying a bit low:

This last one reflects my early fascination with keyboards/synthesizers. I owned a lowly consumer level Casio keyboard, but dreamed of owning something like the Ensoniq VFX. I don’t recall exactly, but I must have drawn this based on some diagram in a keyboard magazine. Now that I’m all grown up, I own an Alesis Fusion 8HD keyboard, which has a lot of the sounds from keyboards I used to dream of owning (thanks to Hollow Sun and others):

Having a Macintosh with MacPaint at an early age helped me develop an interest in design and technical drawing – and for that I am grateful to Bill Atkinson and the rest of the MacPaint/QuickDraw teams.